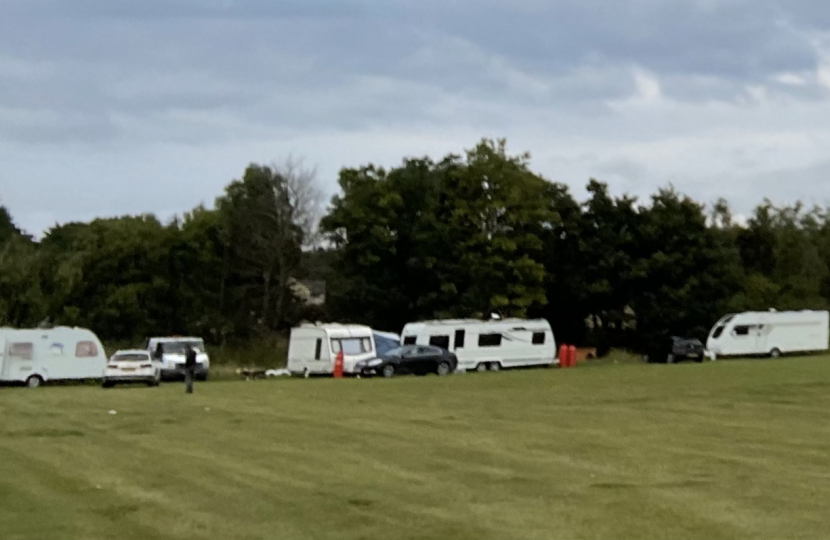 This weekend I have had a significant amount of correspondence in relation to a new unauthorised traveller encampment adjacent the children’s play area in Ashfield. I am aware of the issues caused by this particular encampment at their previous locations.

This new site is on land owned by Workington Town Council, and I understand that they have already instructed bailiffs. This is an option available them and private landowners, but of course comes at significant cost to taxpayers in this case, or the landowner in other cases. I am thankful to Workington Town Council for their swift action on this occasion, which is a marked improvement on the situation we saw at Harrington.

Where the site is on Allerdale Borough Council land there are significant hoops to jump through before a removal notice will be issued by a court, particularly regarding welfare. Encampments are dealt with through a multi-agency Cumbria protocol, and decisions are taken with partner agencies. This inevitably increases the time taken to move sites. As part of that protocol a code of conduct is issued to the encampment, the detail of which can be found with the online version of this statement at markshar.es/traveller-statement. Any contraventions of the code, or any other issue, can be raised with my office by emailing office@mark-jenkinson.co.uk

In contrast, the Police have significant powers under the Criminal Justice and Public Order Act 1994 (Sections 62-64) to seize vehicles or to move on unauthorised encampments immediately and without the intervention of the court. These powers remain unused in Workington in my time of office so far, and I call upon the Police to use the powers available to them.

I welcome the fact that as part of the landmark Police, Crime, Sentencing and Courts Bill, new laws will be introduced to increase the powers available to the police in England and Wales, but I remain to be convinced that they’ll be used locally.

The Equality Act 2010 rightly makes it unlawful to treat someone less favourably because of their protected characteristics. However, this legislation should not present an excuse to treat minorities more favourably when they engage in criminal behaviour. Political correctness should never be a barrier to enforcing the law and I would urge the Police to make use of the considerable powers they have at their disposal to take robust action.

Anyone that has previously contacted me about similar issues will be aware of my position on unauthorised encampments. I have worked closely with Councillor Mike Johnson, Conservative Leader of Allerdale Borough Council, and together we have worked extensively with local organisations and representatives of the Gypsy and Traveller community to seek solutions to our ongoing issues.

It is no secret that this issue has been kicked into the long grass by successive Allerdale leaders for decades. While there has been no significant increase in unauthorised encampment activity in that time, it is increasingly encroaching on peoples lives and their right to amenity.

A potential location for a permanent Gypsy and Traveller site that had undergone significant local consultation was finally adopted by this Conservative council in 2019, in the Local Plan Part 2. This is the first step in providing a permanent site, on which residents would pay to stay. Adoption in the Local Plan does not mean that the site must be there, and such a site would be subject to all usual planning rules and procedures. Independent councillors voted against its adoption – had they been successful in blocking adoption, we would be still be back at that part of the process.

This year’s Allerdale Borough Council budget has - for the first time, despite this being an ongoing problem for many years - budget lines dedicated not only to the enforcement, security and clean-up of problem sites; but also to the work to provide a permanent site. Not a single Independent councillor voted for that budget.

The needs assessment is currently being refreshed, which will inform the required size of a such a site. I will support any application for central government funding for that site where it will go through the usual procedure, and residents have been consulted.

A PDF copy of Allerdale Borough Council's Gypsy and Traveller Position Statement, dated 5th AUgust 2021, can be downloaded below.

A code of conduct is provided to residents on site, which states the following behaviours are not acceptable:

Residents in the area receive a joint information sheet from Allerdale Borough Council and Cumbria Police.