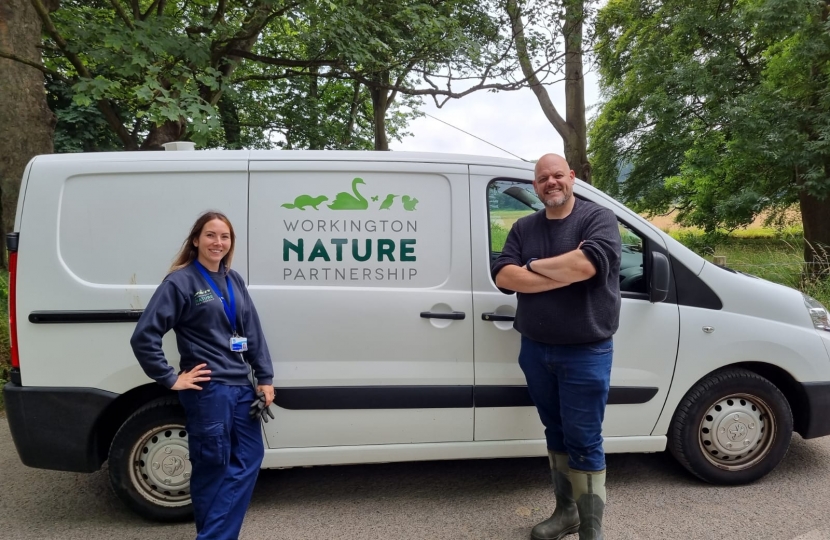 Reagan explained the serious issues that Himalayan Balsam causes, such as spreading rapidly, so that native species are unable to compete for sunlight and die, leading to a decline in biodiversity and erosion of riverbanks.

Along with volunteers, Mark joined Raegan and Kevin, in pulling large amounts of Himalayan Balsam. They piled the Balsam out of the public’s way, where it will rot down so that it cannot go to seed and spread further.

Himalayan Balsam was introduced in the UK in the 1800s, and spreads rapidly. If action isn’t taken in our local area to reduce its presence along our rivers, the fall in biodiversity may set us back years and damage the attractiveness of our parks for residents and visitors.

Mark said “I strongly encourage people to volunteer with the Workington Nature Partnership and support the great work they are doing to increase biodiversity across the Workington area.

“Raegan Blacker and the Workington Nature Partnership have been doing a great job tackling the spread of Himalayan Balsam and other invasive species. It was great to hear that they often see large numbers of active and committed volunteers, who care about their green spaces.

“I would like to thank them for all the work they do to look after Workington’s parks. If you want to get involved, Workington Nature Partnership can be contacted through their Facebook page.”