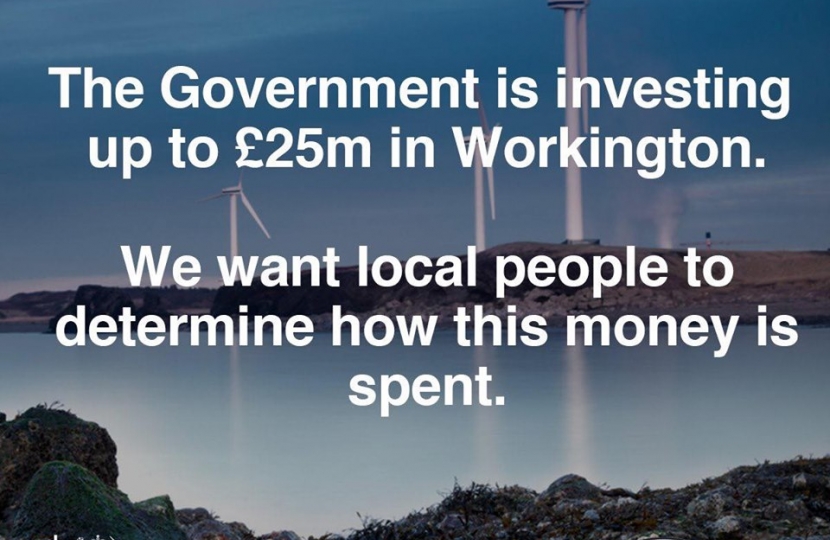 In September Boris Johnson and the Conservatives announced the 100 towns that will receive extra funding to level up opportunities across the country and ensure places like Workington can look towards the future with renewed optimism.

The Government has now published its Towns Fund prospectus, which sets out how local authorities can access their share of millions of pounds from the £3.6 billion Towns Fund to regenerate their town centre, boost business and create a brighter future for their area.

Worth up to £25 million for each town, this funding will ensure that towns get the improved opportunities they need to create more jobs and boost the economy, from spending on transport improvements to broadband connectivity

“I was delighted when Workington was selected as one of the towns to receive a share of the £3.6 billion Stronger Towns Fund, and that as much as £25 million will be going towards transforming our town’s economic growth prospects.

“We now have more information about how the local council can put together a plan to invest in Workington’s future, and I am looking forward to supporting that effort in any way that I can.

“This announcement was straight off the back of the announcements that the Future High Streets fund had been extended to include a multi-million pound bid for Maryport, and that Maryport had also been successful with a bid to the Heritage Action Zones fund.

“This Government is going further than any before to level up every corner of our country. It’s fantastic for the town of Workington, and the rest of the Workington constituency, that we will be among the places to benefit, and that the community has an opportunity to feed in ideas and shape the next chapter in the town’s history.”

“This government is committed to levelling up all parts of the country. For too long, many towns have felt neglected by Westminster politicians and that must change.

“We are determined to ensure that prosperity and opportunities are available to everyone across the country, not just those living and working in London or our biggest cities.

“We created the £3.6 billion Towns Fund to help businesses grow, connect communities and give people the skills they need to succeed by providing transformative investment in transport, technology, skills and culture.

“No town is exactly the same as another. We will work with local people to decide how this investment of up to £25 million in each town can be used to ensure that these 100 towns can look to the future with a new optimism.”