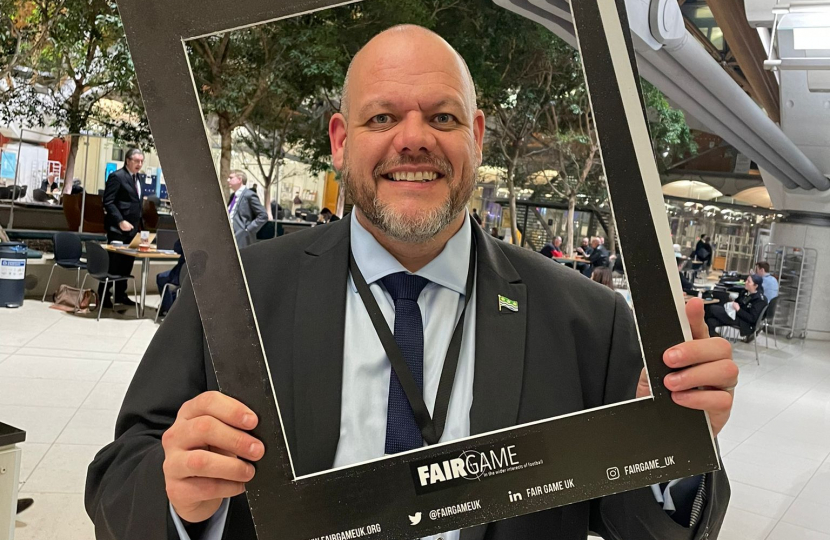 MARK Jenkinson, the MP for Workington, today became the latest MP to endorse Fair Game and pledge to back the implementation of the Fan-Led Review in full.

Fair Game is a group of 34 value-driven football clubs that is working with dozens of world-renowned experts to develop realistic long-term solutions to the problems our National Game faces.

Fair Game backs the recommendations of the recent Fan-Led Review chaired by Conservative MP Tracey Crouch, which includes the creation of an independent regulator, protection of a club’s heritage and traditions, and measures to ensure financial sustainability within football.

Workington MP Mark Jenkinson backed the Fair Game pledge after a cross party motion put to Cumbria County Council in February by Councillor Ben Shirley who represents Dalton North, and Cllr Will Clarke who represents Lakes ward on the authority. As part of the motion, the Councillors called on the council to write to Cumbria’s MP’s who haven’t yet supported the Fair Game pledge, calling on them to do so.

Mark Jenkinson, who joined Simon Fell, the MP for Barrow, in posing with Fair Game’s Selfie cards in parliament, said:  “Covid has devastated the finances of so many lower league clubs, and left dozens of other clinging on by their fingernails yet the game itself remains the richest sport in the UK.  I am therefore delighted to pledge my support to Fair Game which aims to put community at the heart of the beautiful game.

“The recommendations in their milestone report – which I would like to see introduced in full – will benefit clubs like Workington Reds, and the many grassroots clubs across my constituency.

The measures will usher in a new era of greater fan ownership, and fan-led governance of clubs, and will help ensure that local communities are adequately compensated in the event of a club going into administration.”

To help enshrine the Review, Fair Game’s team of experts is proposing the introduction of a Sustainability Index. The Index will score all clubs from the Premier League to National League North and South, and the top two women’s league on four criteria: Financial sustainability, good governance, equality standards, and fan and community engagement. And then distribute the funds given to the EFL by the Premier League, currently around £380m, depending on how high clubs score on the Index.

Simon Fell, MP for Barrow and Furness, said: “Football at all levels is something which Furness residents care deeply about. It forms such an integral part of our community, and is a force for good.

“Tracey’s excellent fan led review makes sense. It give fans an even louder voice, and protects communities in the case of football clubs going bust. I’m delighted that Mark has joined me in endorsing Fair Game, and the Crouch review.”

Niall Couper, CEO of Fair Game, added: “Fair Game is hugely thankful to MPs like Mark Jenkinson. The Fan-Led Review has opened the door to a new future for football. But that future now rests with our politicians. We call on all MPs to back its implementation in full. It needs to be including in the upcoming Queen’s Speech and passed into legislation as fast as possible.

“Football is our National Game. It is the lifeblood of communities up and down the country. It needs protecting.”

Councillor Ben Shirley said: "It’s great to see the motion which Cllr Clarke and I put to council already gaining traction. The financial model of football is broken, and Tracey Crouch’s fan led review must be implemented in full, to safeguard football at all levels. I hope that all Cumbrian MP’s will join Simon, and Mark in endorsing the campaign, which I am sure that they will.”

You can ask your MP or local Councillor to back Fair Game and pledge to implement the Review in full. To help Fair Game have produced a simple step-by-step guide here.