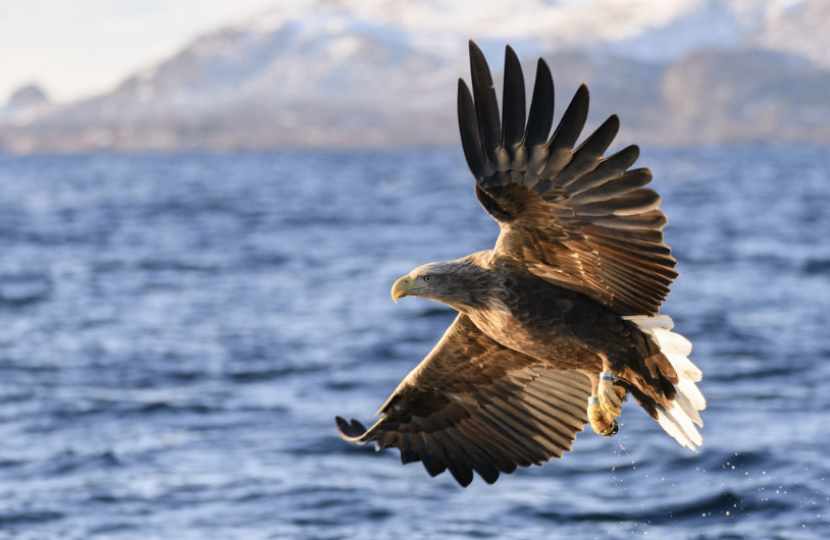 I am supporting a project that is considering the proposed reintroduction of White-tailed Eagles (Haliaeetus albicilla), sometimes known as Sea Eagles, to Cumbria and the surrounding region.

Cumbria is a location of strategic importance for White-tailed Eagles, sitting between Scottish, Irish and Southern England populations which have already been reintroduced, and acting as a potential connection point between each of them. We already have visiting eagles, but they tend to return to the area their own nesting site to breed.

There are more detailed FAQs, originally in relation to the Isle of Wight reintroduction project, on the Roy Dennis Wildlife Foundation website.

Here are some of the questions most often posed to me:

Why not wait for them to re-colonise naturally?
White-tailed Eagles do not breed until they are 5-6 years old and have low breeding success. In addition most prefer to breed with or near established pairs, close to their natal site. This means that population increase and range expansion are very slow. Eagles could take decades, if not hundreds of years, to recolonise northern England naturally, but a reintroduction project would significantly speed up this process.

Will the project benefit the local economy?
In Scotland eagle tourism is extremely popular and recent RSPB commissioned reports have shown White-tailed Eagles generate up to £5 million to the economy of the Isle of Mull each year, and £2.4 to the Isle of Skye. It is clear therefore that White-tailed Eagles would give a considerable boost to tourism in Cumbria, including in winter when it is generally more difficult to attract visitors.

What do they eat?
As a generalist predator, White-tailed Eagles take fish, birds and small to medium-sized mammals and also scavenge carrion, which can be an important element of their diet throughout the year. They tend to favour whichever prey is most seasonally abundant. Fish, for example, are particularly important in spring and summer, with waterbirds often favoured in autumn and winter. The White-tailed Eagle’s preference for fishing in shallow water mean estuarine areas in and around the Solway will be favoured fishing grounds. In Denmark, where there are now over 100 pairs of breeding White-tailed Eagles (from none in the early 1990s), it is thought that most geese and ducks taken by eagles are likely injured or sick. They regularly search tidelines for washed up dead fish, birds and sea mammals. Foraging eagles will regularly encounter bird carcasses, and they will also take any washed-up dead fish or marine mammals as they search shorelines for food. A recent study in Germany showed that carrion account for almost 30% of White-tailed Eagle diet in winter.

Will the eagles take lambs or other livestock?
Concerns are often raised by some that White-tailed Eagles may predate lambs or other livestock. Evidence indicates that some White-tailed Eagles scavenge dead lambs in Scotland and very occasionally take small and weak individuals of blackface sheep on hill grazings. However this is predominantly due to the open range nature of agriculture and bad weather as well as the lack of alternative wild prey in some biologically poor regions. The Isle of Wight project team visited the Netherlands to speak with researchers monitoring the expanding Dutch White-tailed Eagle population. There White-tailed Eagles breed in areas grazed by sheep, but the researchers, who have kept detailed feeding records, have recorded no cases of eagles taking lambs or any other livestock and there is no conflict with farming. There is an abundant supply of wild prey – particularly water birds and fish – in the Netherlands and a similar scenario is likely in Cumbria given the high prey availability in the Solway and surrounding areas. In Ireland, where there are now ten breeding pairs of White-tailed Eagles following a reintroduction project, there have been no cases of eagle predation on lambs and most farmers are either neutral or supportive of the project, despite initial concerns.

The Lifescape Project is an ecosystem restoration and rewilding charity which wants to see a world where wild nature can coexist and thrive alongside humanity. Their vision includes the reintroduction of species which are missing from ecosystems due to anthropogenic reasons where that is appropriate and feasible.

White-Tailed Eagles are the largest native bird of prey in the United Kingdom. Adults can have a wingspan of up to 2.5 meters. They are opportunistic predators and scavengers feeding predominantly on waterbirds, medium to large fish species, mammals such as lagomorphs and carrion. White-tailed Eagles were once widespread in Great Britain but declined in numbers due to agricultural changes and then became extinct in 1916 through human persecution. Legal changes and changes in the perception of raptors has led to an increase across the palearctic, but not yet in Great Britain, with all adult birds restricted to the Scottish mainland and offshore islands.

Over the past several months stakeholders have also formed a White-tailed Eagles Cumbria Working Group, with a shared interest in the potential for White-tailed Eagles to be reintroduced in Cumbria. The group consists of the Lifescape Project, Cumbria Wildlife Trust, RSPB, the Solway Coast AONB, University of Cumbria, University of Leeds and Natural England. This Group will oversee the development of the proposed feasibility study and any subsequent post-release activities.

It is critical for any species reintroduction project to consider the level of social support it benefits from and to only proceed if there is no reason to believe that social factors will make the project unlikely to succeed. This is made clear in both IUCN international guidelines and English-specific guidelines for species reintroductions, and to that end I'm seeking your views which I will submit to the project.

It is very important that the view of people and interest groups in Cumbria and surrounding areas are taken into account to inform the proposals. I am very grateful for your response.

The survey should take 3-5 minutes. Before taking the survey, I suggest you take the time to learn about the proposals by reading the information above, following the links to further information and reading the PDF which can be downloaded below.